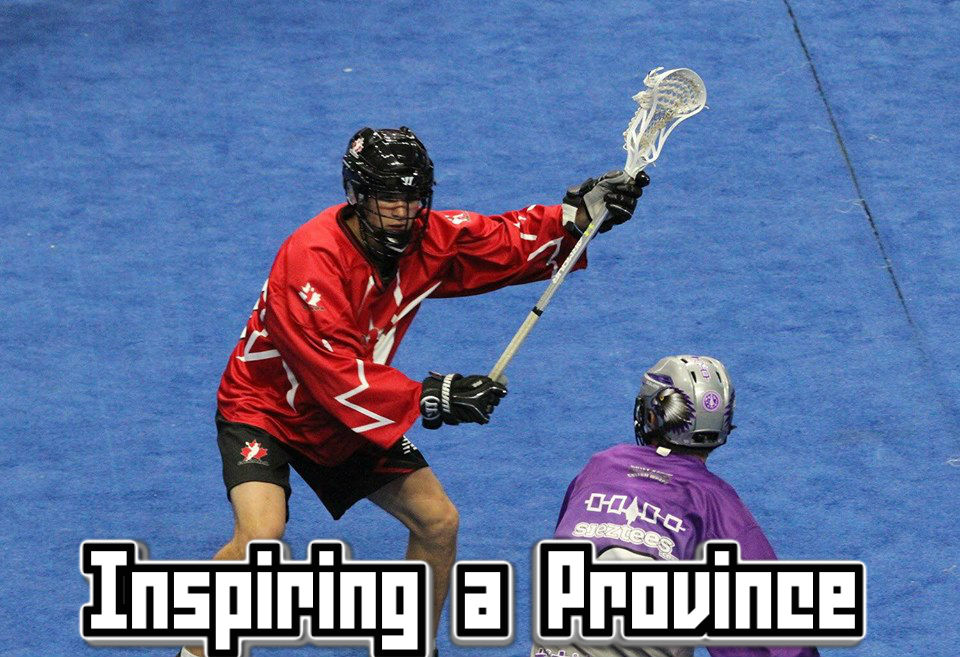 The player in question is Mathis Couillard from Blainville, Quebec. I reached out to Mathis not too long ago and asked if he was interested in doing a Q&A. His response “We are all working towards the same goal, grow the game.” Quite the professional for an athlete who is still in high school.

Late summer early fall I saw some groundbreaking news for Quebec Lacrosse. It was when I was reading about the Heritage Cup 2017. They added a U17 game during the day between the Iroquois Nationals and Team Canada. As I skimmed through the roster I couldn’t believe what I saw. A Quebecer cracked the squad! Didn’t know the kid or anything but just happy for what it does for Quebec Lacrosse. Shows the youth it’s possible, motivates players and coaches. 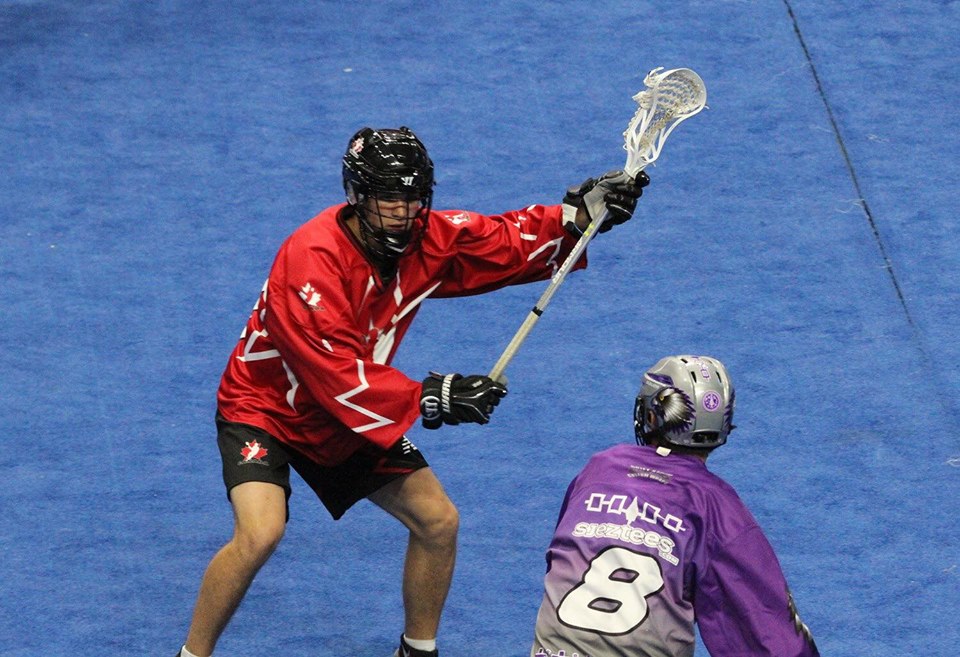 Mathis defending the ball carrier during the U17 game.

Congrats on everything, Mathis! So, we’ll start from the beginning. When was the first time you were exposed to lacrosse? When did you start playing?

The first time I picked up a lacrosse stick was when I was 12 so in grade 6. It was at an open door for the association de crosse de Blainville, my hometown. After 5 minutes of playing I knew I wanted to play this sport and I fell in love with it.

Did you play other sports or just lacrosse?

I’ve always been a sports guy, tried many sports before playing lacrosse. Played 6 years of hockey, 5 of soccer, 3 of climbing and 2 of swimming. I like hockey a lot but not as much as lacrosse.

My favorite player is Mark Matthew because he’s a pretty good overall offense player. He has everything, he’s big, he’s fast, he can score from everywhere and he’s good at making space for others, he is an example for me.

Steph Charbonneau is a great inspiration for me. Like me, is a guy who grew up playing lacrosse in Quebec. He got the opportunity to play Junior A for the Barrie Lakeshore where he was the captain of the team on his second season. On his 2017 season, he got traded to Coquitlam and he went to the Minto Cup with them and lost in final. He also got drafted for the Calgary Roughnecks and he got a spot on the practice roster. For all those reasons, he is an inspiration for me and he drew a path that I will try to follow. 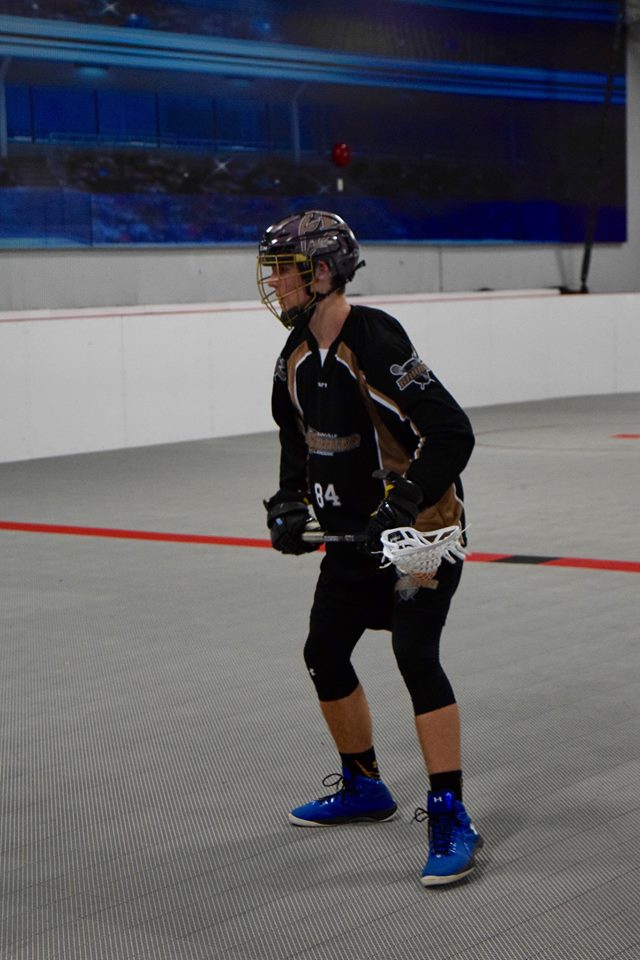 Blainville Barons, the first team Mathis ever played for

Do you play lacrosse all year around? What teams do you play for? Where does it take you?

I do play lacrosse all year long except fort November and December where I don’t have any. 2017 was a busy year for me. At the beginning of the year, I started by playing 4vs4 box season with my house team in Blainville. I also have been invited to do some pre-season practices with the Kahnawake Hunters in the junior B. During spring I have been playing house league box with the Blainville Barons and at the same time I was playing for my school field team until the end of the school year.

After that, I started practicing for Team Quebec as well as doing 2 tournaments in Ontario with the North-Shore REP team. We lost in final at Gloucester and won at Nepean. I also did 2 other tournaments with Team Quebec in July and the Nationals in the beginning of August. After the Nationals I have been playing fall field lacrosse with the U-19 Mustangs Select and I also helped the U-16 team winning the Albany tournament. The Heritage Cup, where I played for Team Canada, was held at the end of October.

You got chosen to represent your country in it’s national sport. How did this opportunity come about?

After the National championship with Team Quebec, our head coach Paul Lehmann send us an email about Team Canada and the Heritage Cup. Players interested to enter Team Canada had to submit their name and than the Team Canada coaching staff would select the players through all the name from across Canada. I wanted to make the team pretty bad, but I knew it would be hard because there was so many great players at the Nationals.

Where were you when you first heard the news about playing for Team Canada? What was going through your head?

It was a morning at the beginning of October. Woke up and my father showed me the email telling me I was confirmed in the team. Was happy but also very proud. Thought it would be a great finish to a great year of lacrosse.

Once you got to Hamilton, what was the play by play or schedule?

On Friday night we had a 2 hours practice at the Toronto Rock Athletic Center in Oakville, right after Team Canada Senior. This is where we all meet and got to know each other. I already made some friends at the Nationals and it was great to see them again. One funny moment came when everybody had to present themselves to the rest of the team. At that moment, we had to mention how many years we have played lacrosse and all players were saying between 8 to 12 years. When it was my turn, I was contrasting a lot with my humble 4 years…

How was it meeting your teammates and coaches from across the country?

There was a good team spirit right from the beginning. At the same time, you could feel the high level of professionalism and focus of every players and coaches. It was obvious that everybody wanted to win the game. I learned a lot of things in the practice and it was nice to play with all those great players.

How did you feel playing in that game? Anything specific stand out that weekend?

It was a bit stressful at the beginning of the game but then it stopped after my first shift. The coaches were very happy with the way I played. I was assigned to defense and I was very solid protecting my zone, recovering some loose balls and doing fast offensive transitions.

What was your best memory from the weekend?

The overall experience is what comes to my mind. Winning the game was obviously great, but the team spirit and the fact that we have been treated like pros really made it a great moment.

What are the lacrosse plans for 2018?

I will probably try-out for the Jr.B Kahnawake Hunters and see how things go there but I also have some other plans that I prefer keeping confidential for now.

Have any idea where you are going to play Junior?

My goal is to eventually play Junior A. I will be 16 at the end of November so I still have a couple of years make this happen.

Know it’s still pretty early now but have you ever thought about playing lacrosse in the NCAA?

I would like to thank Mathis Couillard for collaborating in this piece. The kid is focused, determined and has had a taste of the next level of lacrosse for his age.  Keep following the stick bud, the whole province is with you. 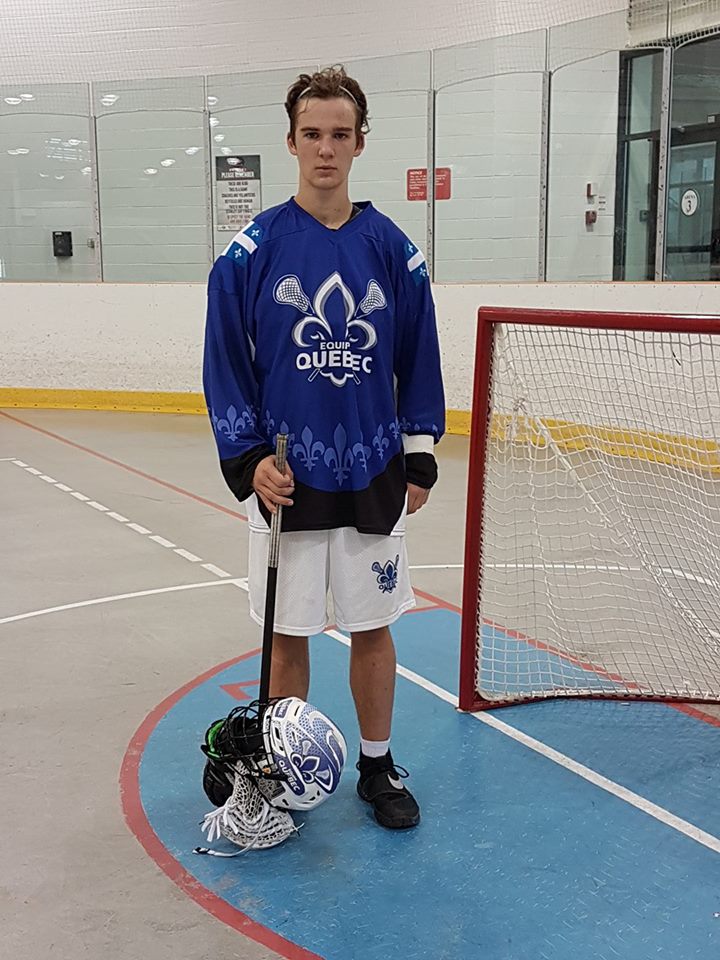