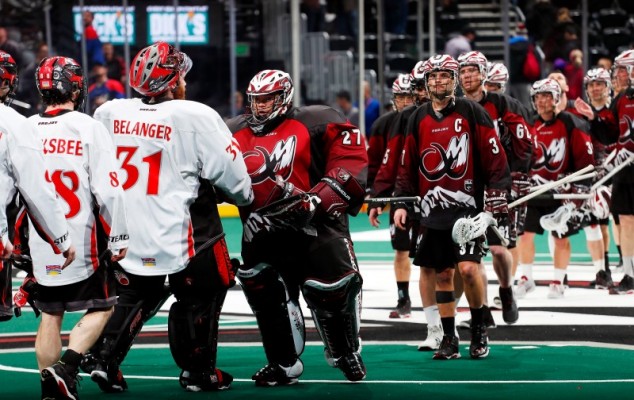 The Vancouver Stealth face off against the Colorado Mammoth on Sunday, March 12th 2017. This is the second game of the weekend for the Mammoth and they are looking to bounce back after a heart-breaker in overtime against the Rush one night prior. Vancouver look to stay hot after a huge win last weekend against the Rush.

It only took at minute for this game to get on the score sheet. Vancouver’s Joel McCready had a bit of room at 13:52 of the first and just took a nice shot. This seemed to inspire Callum Crawford from the Mammoth because he did the exact same thing nine seconds later to tie it up. Rhys Duch would get his first of the game to shake the dust off from missing last weeks game.

In the first five minutes of this game you could already tell it was going to be a track meet. Both teams playing a quick transition game and playing it well.

Very tight game this one is even though it’s 3-1 Stealth going into the second.

Colorado’s Dan Coates displayed why his team puts the C on his jersey. Dan won the faceoff, ran right in and sniped one short side with just 8 seconds into the quarter! Vancouver’s Tye Belanger and Colorado’s Alex Buque had a lot of their plate for the next seven minutes. They both pull off some key saves to help their team in the quest for the win.

The next goal of the quarter would only come halfway through when Duch went underneath his man and finished. This ended a twelve minute scoring drought for the Stealth.

The Mammoth’s Eli McLaughlin would pull off a nice quick stick after getting a pass from Jeremy Noble to bring his team within one.

The Stealth would get the last one of the half and boy was it a beauty. Jordan Durston would shovel shot with his back to the net low to high, a highlight reel goal for sure! Going into halftime score is 5-3 Vancouver.

Just like in the other two quarters someone would get a goal in the first minute. Rhys Duch would get his hat trick goal with an outside shot to give his team a three goal lead. Colorado would response over a minute later with a power play goal by Jeremy Noble, top corner beautiful shot!

The NLL doesn’t really have stats for this but both teams were deflecting shots all night. Enough of an amount that I took notice more than any other game.

Colorado would get the first transition goal of the game with under a minute to play in the third by Cameron Holding. Fortunately for the Stealth Corey Small would sneak one by with sixteen seconds to give his team a 7-5 lead going into the last quarter.

This quarter started off with both goalies continuing their great play, stopping quick sticks and making big saves even on breakaways.

The Stealth would strike first with Durston getting his second of the night on a good shot on the run. Duch would get his fourth of the night moments after with some good footwork and a vintage Rhys outside rip. 9-5 Vancouver.

Colorado would get a lucky bounce with two minutes left in the game when Chris Wardle was at the right place at the right time to put one in and give his team some hope. Unfortunately the Stealth’s Travis Cornwall would score on the empty net to close this game out 10-6 Vancouver.

Both teams played well in this one, I would say the difference maker in it was goalie Tye Belanger for the Stealth. He stole the game from Colorado’s potent offence and is by far the player of the game in my mind.

This give Vancouver a two game win streak but a two game losing for Colorado. The Mammoth are going to be hungry next weekend, looking forward to watching them get their revenge.