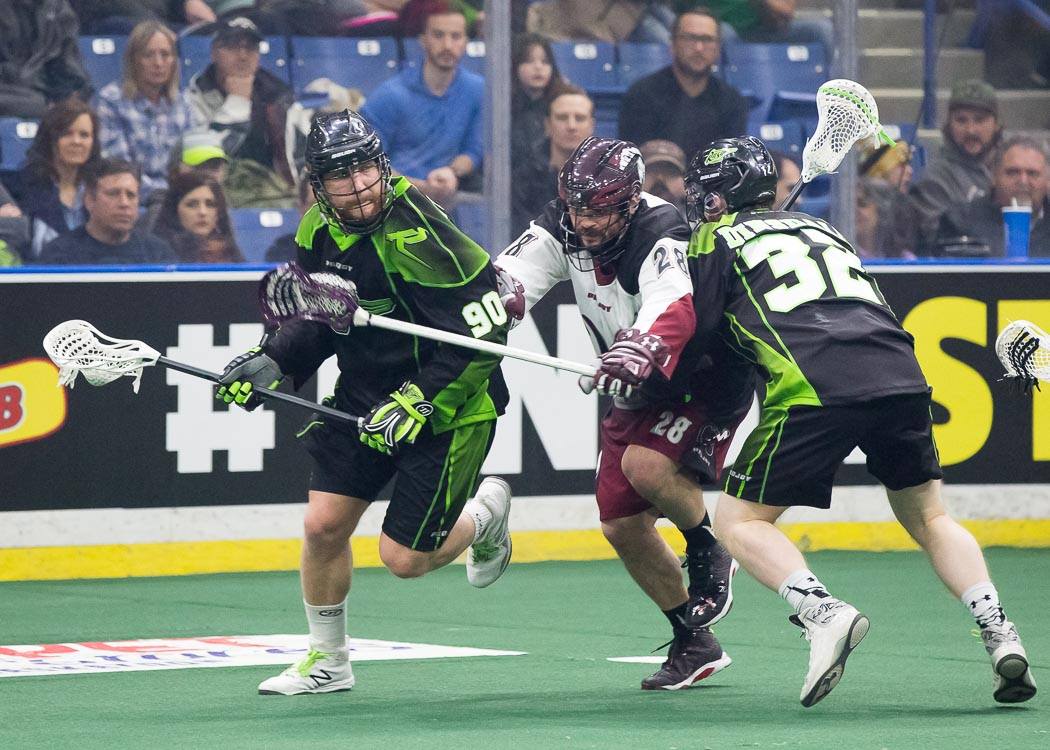 The Colorado Mammoth take on the Saskatchewan Rush on March 11th 2017. Colorado looks to make it two in a row will Saskatchewan look to bounce back after a loss to Vancouver last week. This will be one for the books as they are the two top teams in the west in from of a sold out crowd yet again in Saskatoon.

As expected, both teams came out swinging in the first to get the win. Colorado’s Jacob Ruest would strike first with a nice cut, fake a bury. Using that momentum the Mammoth would get two more in the next three minutes. Chris Wardle would get a transition goal and then would get another short-handed to give his team a 3-0 lead.

Saskatchewan showing they are unfazed by the score would get on the board thirty seconds later with a quick stick on the power play by Robert Church. Mark Matthews would score another power play goal minutes later to cut the lead to one.

Chris Wardle would complete his natural hat trick by beating his defender low, diving and scoring to give his team a two goal lead once again.

The Rush would use the home crowd advantage in the last 4 minutes by getting three goals in that span. Ben McIntosh, Brett Mydske would get one a piece while Church would get his second of the night sending their team into the second quarter up 5-4.

After missing a couple of games for the Mammoth, Zach Greer showed his presence with a power play goal 4:13 into the quarter.

The Rush would get some momentum from their goalie Aaron Bold who made some amazing saves in the span of a couple of minutes. It would pay off for his team as they went on a three goal run in three minutes. Matthew Dinsdale would pick the corner, John LaFontaine would score on transition and Ben McIntosh would get his second of the night to make it 8-5 Rush.

Colorado would finish out the half with a nice drive and dive from Eli McLaughlin making it 8-6 going into halftime.

The second half of this game got serious right from the beginning face-off. Both teams playing very tight defence and despite the score, both goaltenders playing very well.

Callum Crawford would be the first to score this half seven minutes in with a laser snipe from the outside. The Rush would respond forty seconds later with a power play goal by McIntosh completing his hat trick.

The Mammoth would get some momentum going into the fourth. Stephen Keogh would score with just three seconds remaining with the extra attacker to give his team a boost. 9-8 Rush going into the last quarter of play.

The fourth began very physical, both teams knocking each other over more than once in the opening minutes. That would lead to a power play goal by Matthews who just sniped one home to give his team a two goal lead and some energy from the home crowd.

A minute after that goal though you could hear a pin drop, Wardle would get his fourth and fifth of the night in a span of forty seconds to tie this one up at 10. We have a lacrosse game!

Mark Matthews would get his hat trick goal halfway into the quarter to give his team the lead. But just like so many times in this game Colorado would fight back with a goal from Keogh to send this one into overtime!

Shots were 61-42 Saskatchewan going into overtime but those are just numbers, both teams wanted only one thing, two points to finish the weekend.

It would be McIntosh who would score a minute and twenty-four seconds into overtime to please the sold out crowd. This win would give the Rush a perfect record at home and now the top spot in the Western Division.