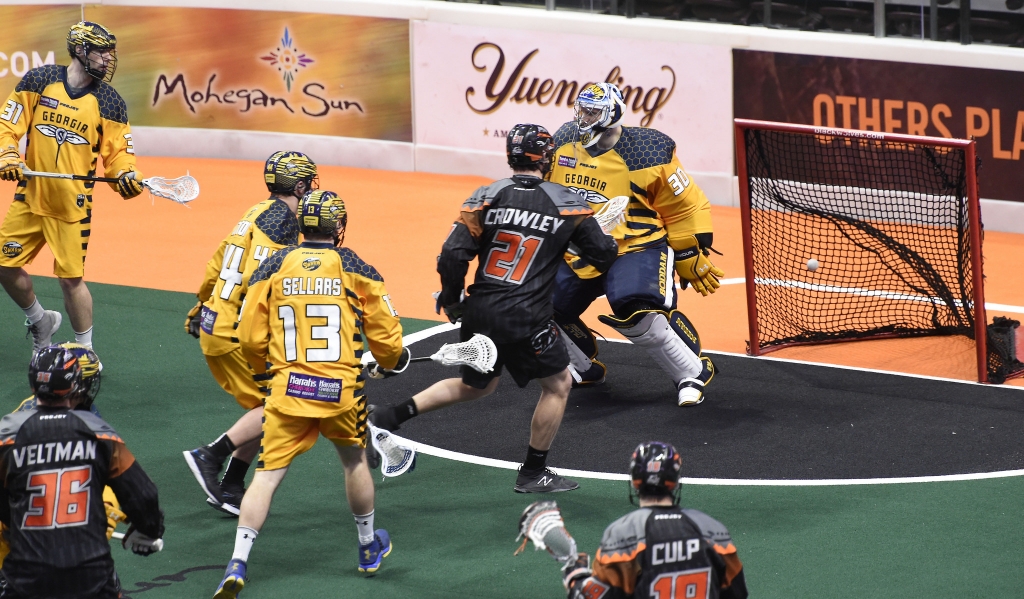 The Georgia Swarm take on the New England Black Wolves on Sunday afternoon March, 12th 2017.  The Swarm look to bounce back after a loss to Calgary last weekend and New England look to make it two in a row against the best team in the league.

New England would be the first to score at 3:16 into the game with a nice shot by Jay Thorimbert. That wouldn’t faze the potent offence of Georgia one bit though. At 10:12 of the first, Georgia’s Shayne Jackson would draw a double and dump a perfect pass to Jordan Hall who would tie the game up at one.

The goaltenders Mike Poulin from Georgia and Evan Kirk from New England really shut down the offence this quarter. The only other goal of the quarter would come with 3 minutes remaining on a perfect two man game from the Swarm. Hall would carry the ball as Johnny Powless snuck behind the defence to bury one for the lead. 2-1 Georgia going into the second.

The Swarm would extend it’s lead two minutes into the quarter with a nice quick stick from Jackson.

That goal must have made New England extra hungry because it sparked a four goal run for the Black Wolves. Reilly O’Connor would sneak behind the defence and display his patience before getting the goal. Kyle Buchanan would then score nineteen seconds later with an outside snipe to tie the game at three.

Fortunately for Georgia’s Jackson would finish on a back-door cut right after to kill a little bit of the momentum for the home team. From then on it was very back and forth to finish out the first half 8-5 New England.

The Swarm would show some fight right out the gate. John Ranagan would display some nice moves to get by his defender and scoring with an assist going to goaltender Poulin.

But like in the second quarter, New England started to go on a run. Shawn Evans and Kyle Buchanan would complete their hat tricks this quarter and Thorimbert would get his second of the night. 11-6 Black Wolves going into the last quarter.

New England seemed to be fired up for this game no doubt. Less than two minutes into the fourth Evans and Kevin Crowley would display a textbook pick and roll. Forty-five seconds later Powless would get a transition goal to spark his team and give them some hope.

It just didn’t seem to be Georgia’s night though or maybe New England got the big boost from the home crowd. The game ended 13-8 New England but don’t let the score fool you. It was an even match-up but the Black Wolves got a couple of runs and stuck with it.

I am looking forward to the next match up between these two squads, they will both come out guns blazing I am sure.