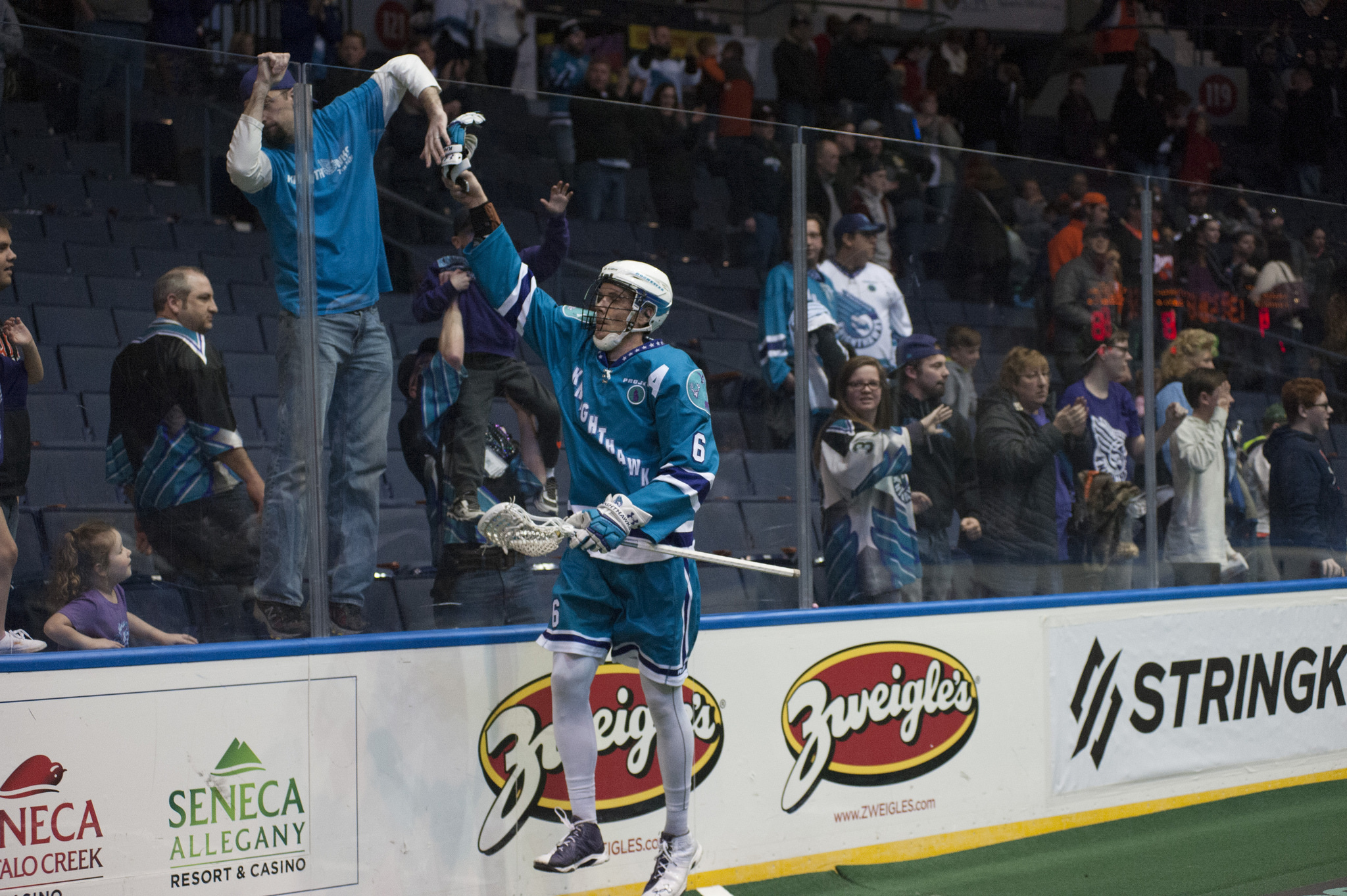 March 4th, 2017. The Buffalo Bandits are at the Blue Cross Arena to take on the Rochester Knighthawks. This is the second meeting between these two teams this weekend. Buffalo took yesterdays win in Banditland 13-9.

Rochester will be looking to bounce back and the Bandits will fight to make it four in a row.

Rochester would find the net first at 11:00 on the power play. Cory Vitarelli would quick stick it home after some good ball movement. For the next eight minutes Dave DiRuscio and Matt Vinc would set the tone for the game. Both goalies exchanging huge saves one after the other.

It was only until the 3:06 minute mark that Dan Lomas would send a rocket snipe from the outside. Each goaltender made 13 saves to close out the first 2-0 Rochester.

The second would commence with both teams giving each other no room to breath. Sticks being checked, bodies being hit, it showed both teams wanted this win.

At 9:20, Buffalo finally got on the board with some nice moves from Dhane Smith to score. Close to a minute after Pat Saunders would tie it up with a nice outside shot.

Rochester and Buffalo would both exchange goals within a minute of each other to keep this game neck and neck. Craig England would show some patience on the power play and drive down to the crease to find net. That would make it 4-3 Buffalo going into halftime.

Just like in the two previous quarters, it took more than a few minutes before any team found twine. Kyle Jackson would strike on the power play to tie things up at 4.

Buffalo would respond a minute later with Pat Sanders sniping once again from the outside for his second of the night.

With 7:15 to go in the third, Brad Gillies would score a massive goal for the Kighthawks. Brad picked off a pass on defence, ran coast to coast and buried it. Ties it up at 5 and hypes up his team in the process. Joe Resetarits would use that with an great individual effort at 1:50. Big goal, giving Rochester a 6-5 lead going into the fourth.

The first ten minutes of this quarter was as close as it gets lacrosse wise. Both teams playing solid defence and making anyone on the box work for an inch. It would take over ten minutes for anybody to score. Mitch Jones getting a huge one for the Bandits bouncing it from the outside.

Shortly after that goal Rochester would take a sloppy penalty for a game this close. Dhane Smith would make them pay getting his second of the night at 3:45. 7-6 Buffalo now with 3 minutes left, still loads of time in a lacrosse game.

Cory Vitarelli would strike for his second time of the night after a nice set up by Dan Dawson and Jarrett Davis. Dhane Smith would then get a huge loose ball at the next faceoff and would complete his hat trick giving his team the lead.

It looked like it was all in the bag, 11 seconds left Buffalo ball with the lead. Rochester’s Josh Currier would strip the ball and get the last minute’s goal with three seconds to spare. Probably the biggest goal of his young career. 8-8, this one’s going to overtime.

Toe to toe, golden gold here we go. It would be the veteran Dan Dawson who would be the hero of this game. He got his first goal of the night to give his team the win. Showing everyone why he is considered one of the greats. Matt Vinc could also be thanked by the Rochester Knighthawks, huge save after huge save he stole the game away from Buffalo.