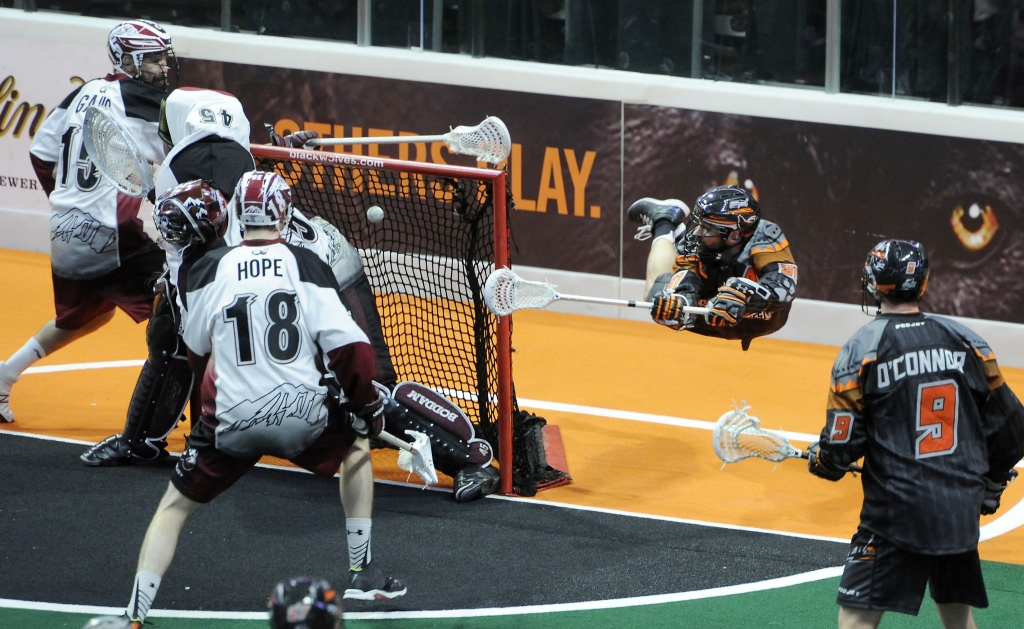 The Colorado Mammoth take on the New England Black Wolves on this Sunday matinee at the Mohegan Sun Arena.

First quarter begins close like expected, both teams not giving each other much room to breathe. It would be Zach Herreweyers who would open up the scoring at 11:54 on a nice drive to the net and bury.

Callum Crawford would then break the goal drought with a good shot off an even greater pick by newly acquired Stephen Keogh. The Black Wolves would answer back on transition two minutes later with Joel Coyle scoring his first NLL goal in his first NLL game.

Colorado would then get a lucky bounce on the power play to end the quarter 3-1.

Stephen Keogh would get his first in a Mammoths jersey with an outside rip just thirty seconds in. Within just two minutes from then Joey Cupido would score on transition twister style and Jacob Ruest would complete a nice cut and quick stick. Colorado is starting to run away with it a bit at this point, they are connecting very well on offence to create goals.

It would be a little more than halfway through the second New England started to show signs of life. Kyle Buchanan would score on the power play from behind the net dive after some great ball movement.

Taylor Stuart would then score on transition to silence any momentum New England began to have. Kevin Buchanan would score with 2:24 left in the half with nifty stick skills and bury.

The half ended 7-3 Colorado but New England was starting to show some signs of life near the end.

Colorado didn’t take its foot off the pedal for a second as Zach Herreweyers and Stephen Keogh scored one goal a piece four minutes into the second half. It was after Keoghs hard working goal that New England pulled Evan Kirk for backup Doug Jamieson. Can’t put too much blame on Kirk though, Colorado just seemed to be clicking well together Sunday afternoon despite not having John Grant Jr. or Zach Greer in the lineup.

Daryl Veltman would get his first as a Black Wolf on the power play at six minutes. A little over a minute later Reilly O’Connor would score a hardworking goal to give New England some momentum. Just like before though on this Sunday afternoon Colorado would respond quick. Callum Crawford would get a power play goal a minute after and then a transition goal by Illija Gajic less than a minute after that.

You couldn’t blame the New England Black Wolves too much though, Dillon Ward was playing solid for Colorado and their defence was also on its game.

New England would then take a hit as Shawn Evans would be sent to the locker room and not return for the rest of the game.The quarter would finish with Seth Oakes driving and burying at 3:25. Kevin Crowley would then score off a good shot a minute later to give New England some drive finishing the quarter 11-7 Colorado.

The last quarter of the game would but a strong battle between both squads for the first 6 minutes. With some nice passing from Joel Coyle and Dan Ball, Setih Oakes would score a transition goals to cut the lead to 3.

It seemed to be the story of the afternoon but Eli McLaughlin would score less than a minute later putting the lead back to 4. Chris Wardle would then score again at 6:26 on the power play to extend Colorado’s lead 13-8.