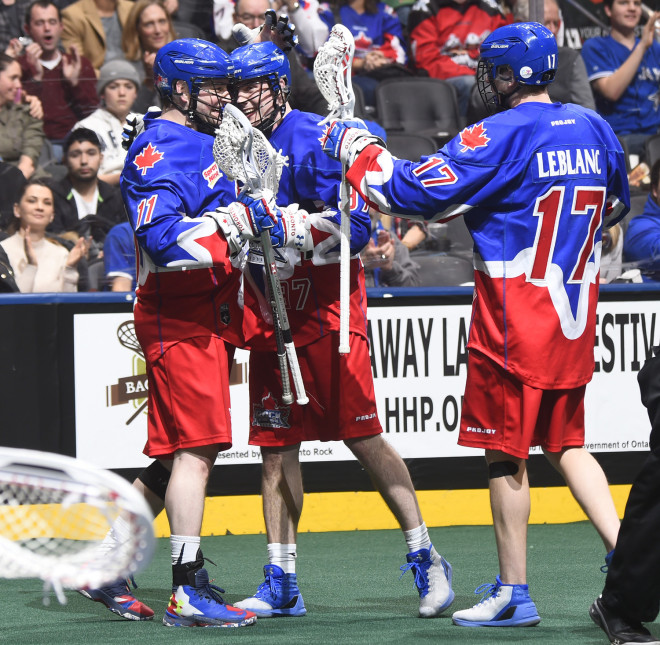 March 11th, 2017, the Calgary Roughnecks take on the Toronto Rock. Calgary was coming off a strong win against league leading Georgia Swarm last week. Toronto looking to bounce back after an overtime loss against the New England Black Wolves.

Before the game this evening was a historic ceremony for recently retired Colin Doyle. The Toronto Rock organisation raised his number seven banner to the rafters beside fellow ex-teammate and friend Bob Watson. You know after a ceremony like this Toronto will be hungry for the win, get Doyle the win on this special night.

The game started out with both teams playing well and feeling each other out. Each side only had two shots each about half way through the quarter.

It would be Toronto’s Tom Schreiber who would open up the scoring with 7:42 remaining with a rocket of a shot on the run. That goal seemed to give Toronto a boost as Damon Edwards would score off the next face-off. Edwards would pick up the loose ball, walk in and place an accurate shot to give his team a two goal lead.

The battle would continue for the last seven minutes and Calgary would go scoreless in the first. The Rock’s Sandy Chapman tipped toed around the crease shorthanded to give Toronto momentum going into the second.

The Roughnecks wouldn’t waste much time on their power play coming into the quarter. Curtis Dickson would score a nice twister shot fifty-four seconds in. Calgary kept taking penalties all quarter which made it difficult for them to get ahead. Brett Hickey and Schreiber would score two power play goals twenty-five seconds apart to give Toronto a 5-1 lead going into halftime.

Some big stops from the Rock’s Nick Rose and their special teams really leading the way for Toronto. They had two power play markers and a shorthanded goal in the first half. Also, keeping the Roughnecks offence to only one goal in a half is no easy task…momentum, Toronto.

Hickey and Schreiber would complete their hat tricks for Toronto while Calgary’s special teams were on fire. The Roughnecks got a shorthanded goal from Greg Harnett and power play goals from Dickson and Dan Dobbie. 12-6 Toronto going into the last quarter.

Calgary’s Jeff Shattler would get a transition power play goal with forty-two seconds in to give his bench some hope.

Like so many times that night though, Toronto would just kick right back, maybe it had to do with Colin Doyle being in the building. The Rock would score three goals in less than two minutes. Stephan Leblanc would get his hat trick 2:42 into the quarter while Hickey would get his fourth and fifth of the night forty-five seconds apart.

Toronto are able to give Colin Doyle and their fans a 16-10 win. Shots were 58-40 Toronto but you can’t blame Calgary’s goaltenders one bit. Toronto just kept going on runs and didn’t stop their momentum.