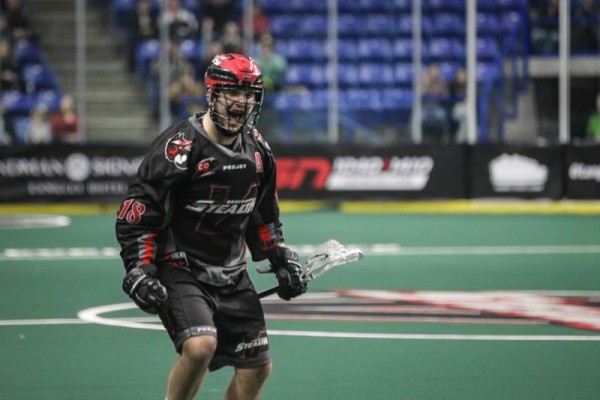 The Vancouver Stealth are looking for a big win at home against the two time reigning champs the Saskatchewan Rush, March 4th 2017. The Rush have won six in a row since starting 0-2 and the Stealth look to get their first win at home.

Saskatchewan would open the scoring about five minutes in with a transition goal. Jeff Cornwall would get the goal in the same fashion he won it for the Rush last year in the Champions Cup final. Robert Church could take out the garbage beautifully a couple of minutes later to make it 2-0 Rush.

After a week off, the Stealth’s Rhys Duch would get his team one on the power play with 4:20 left to play. A little shy of a minute later Ben McIntosh would restore the two goal lead with a quick stick. Vancouver wouldn’t roll over though, getting one back in about the same amount of time. Jordan Durston would do a sneaky back door cut to bring his team within one.

Adrian Sorichetti would get a nice seal and screen from his line-mates.  Sorichetti shot on the run to make it 4-2 with 2:07 remaining. Like twice before in this quarter, Vancouver wouldn’t let go and would strike back with a low power drive and bury by Joel McCready. Unfortunately for them, Adam Jones would score thirty seconds later with an outside rip that would end the quarter 5-3 Saskatchewan.

Shost are 18-11 in favour of the Rush. In the last four minutes of this quarter there were six goals! Both teams taking all the chances they can get to come up with the win.

Corey Small would get his first of the game over five minutes into this quarter. His line-mates gave him a double up seal pick and Small just swept around and shot one home, 5-4. Not too long after the Stealth would tie the game up with a textbook transition goal. Matt Beers to Justin Salt, Salt running down the floor top speed and finding a flying Logan Schuss off the bench.

The Rush would kill the Vancouver momentum a couple of minutes later with a great snipe by Curtis Knight. The Stealth would tie it up before this quarter is over though. Goaltender Tye Belanger would save a shot and pass to a sprinting Joel McCready who would bury it to finish the first have 6-6. Shots are 33-19, Vancouver’s Belanger really giving his team a chance in this one.

The Stealth would start this half man down because of a last minute too many men call. Fortunately for them Belanger would make a saves thirty seconds in and then find a streaking Matt Beers who would give Vancouver it’s first lead of the game.

The Rush’s Adam Jones would tie it back up for his team with a very close crease diver, no challenge so the game goes on.

Vancouver would now go on a three goal run to give them their biggest lead of the game. Durston would get his second of the game with an outside shot.  Cory Conway would complete a give and go with Corey Small. Then Belanger…like twice before, would make the save and throw his most beautiful pass of the night.  Justin Salt who would get his first transition goal of the night.

Saskatchewan would close out the quarter with a power play goal by Ryan Keenan showing off his quick stick abilities. The Rush would get the extra attacker on with seconds left and Robert Church would just walk in and shoot one home to bring this game within one going into the fourth.

Vancouver would score first on the power play four minutes into the quarter with an absolute rocket by Logan Schuss. Schuss would then complete a pick and roll with Small minutes later to give Small his hat trick. The Stealth are now up by three. The nail in the coffin would be Salt’s transition goal with 4 minutes left, his second of the night to give his team a four goal lead and momentum.

The fourth was a big one for the Stealth, they completely blanked the Rush’s offence which is not an easy task. Belanger made 20 saves in that quarter to solidify the win. Huge win for Vancouver at home!