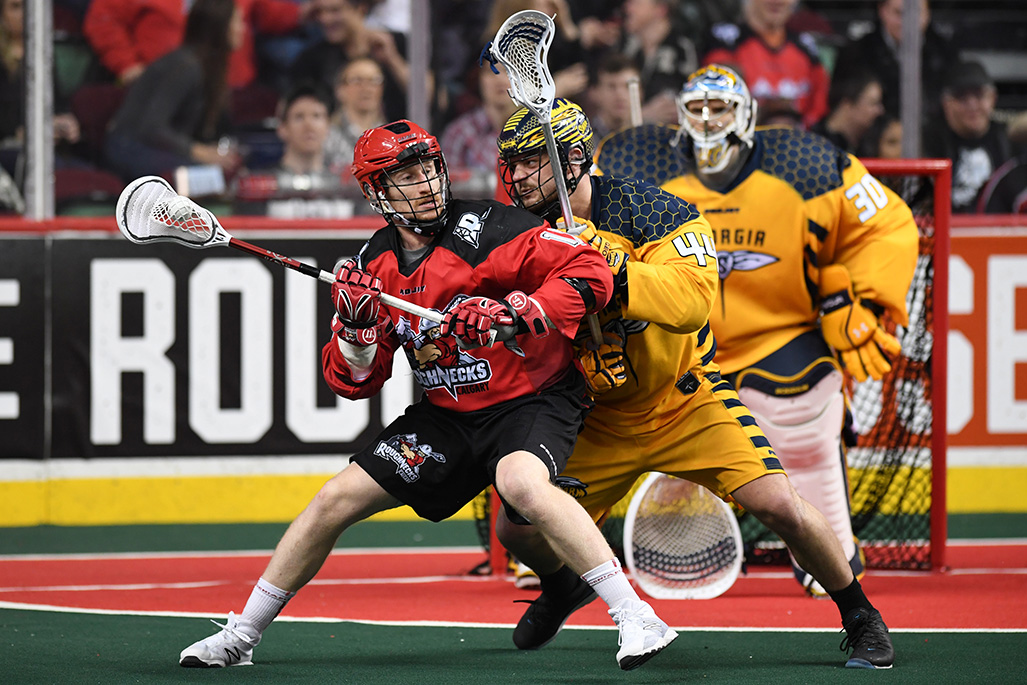 The Georgia Swarm are back from their weekend off as they face the Calgary Roughnecks at home on March 4th 2017. Calgary looks to forget yesterdays smashing from Colorado and to snap its five losing streak against the top team in the league, Georgia.

Now I kind of figured that this game would be a high scoring one but I don’t think anything could have prepared us for this.

Calgary basically played their best quarter of the year. Everything was bouncing their way and they took advantage. In the first four minutes it was already 3-0 Calgary with a 6-1 shots advantage. They then scored 5 goals in 3 minutes which goes to prove, when you’re hot, keep shooting.

Georgia got a lucky bounce at 9:13 from Johnny Powless but Calgary was just putting on a show this half.

Transition goals, outside snipes, shorthanded goals, beautiful behind the back shots and big saves from Calgary’s Frank Scigliano. A half that Georgia will have to put behind them. 13-3 at halftime.

Put behind them is what the Georgia Swarm did. Shayne Jackson, John Ranagan, Kiel Matisz and Jordan MacIntosh would all score four in four and a half minutes, giving Georgia some life in the second half. Strong cut and buries, beautiful tick tack toe quick sticks, good ball movement and sharp shooting. The Georgia Swarm showed in these four minutes why they are the top of the league.

Calgary would finally cut the Georgia momentum when Curtis Dickson completed his hat trick shorthanded by diving through the air and scoring. Dane Dobbie would also complete his hat trick this quarter on a pick and roll play with Jeff Shattler. This would close this quarter 15-7 Calgary.

Just like in the third, the Swarm came into the quarter still with some fight. With four goals in the first five minutes Georgia was start to get some energy on their bench. Kiel Matisz would complete his hat trick for Georgia.   Lyle Thompson would get a nice quick stick and Shayne Jackson pulled off a great pick and roll with Jerome Thompson.

For the first half of this quarter you feel a bit of worry from Calgary. The home crowd screaming for a goal, Georgia clicking and slowly pulling themselves back into it.

It would be at 8:15 of the quarter that Scigliano would send a perfect pass to Dobbie off the bench to complete his sock trick. This beauty of a goal gave Calgary back some momentum. Both teams kept fighting it out but it would be Tyson Bell’s coast to coast transition goal that would nail this one in the coffin.

This one would end 18-11 Calgary. Georgia showing a bit of rust from their weekend off in week 9. Calgary giving the league a statement game, showing they can run with anyone and broke that dreaded 5 game losing streak.