Lacrosse positions are pretty straight forward.   Players that score goals are attackmen and defenders prevent the other team from scoring. Goaltenders stop the ball.  Two exceptions, in Field Lacrosse there are some players who play both offense and defense.  They called them middies or midfielders and the beauty of it you can throw a long pole defender in the mix.  A longpole goal…always glorious.

Five players and a goalie for each team on the floor at all times.  Some box teams go with the up, down and off method. All five players play a shift of offense, run back for a defensive shift and then off. This was how box was played until a decade ago and now has evolved into a offense/defense system.  5 O guys go out, use the 30 seconds and try to get a goal.  When the other team gains possession all 5 O guys run to the bench asap.  5 D guys run out the backdoor and defend the floor. Makes for a speedy pace and quick opportunities for teams.

Crush some bones in a zone or man to man fashion

Players that play O and D, this has sped the pace up of lacrosse of the years.  Defensive minded players who can run up the floor and bury it in the net.

Ninjas that are in the crease area.  Goal scorers who have strong one-on-one skills.  They are also known for the quick stick abilities and are able to score in tight spaces.

Sniping position.  If you are alone in this space of the floor, shot!  Pretty straight forward.

Player is almost always a threat to score and usually a strong long shooter.  Feeds the ball to his teammates and cuts to generate motion offense.

Final line of defense, no pressure.  Keeps the ball out of the net, communicates well with the defense.  Able to throw a strong clearing pass for fast breaks or just regular transition.

In Field Lacrosse there are four different lacrosse positions, here is a brief description of each:

Best known for their superior stick skills, shooting abilities and speed. Not saying that it is all they do, exceptional attackmen can also feed the ball to teammates and create plays. Attackmen have good foot work and dodges to get around the defenders body and stick checks. As by the rules of Field Lacrosse there must be three attackmen on the offensive side of the field at all times. 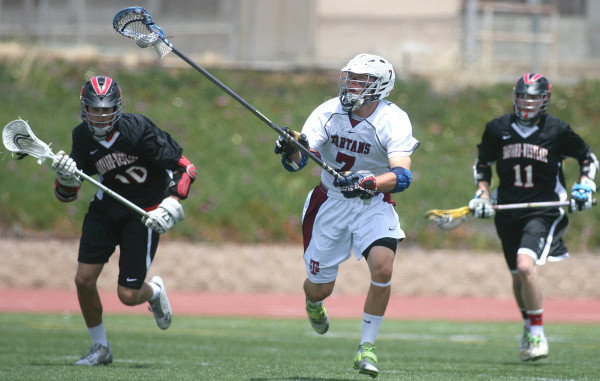 Middies as they are called transition the game from offense to defense. A midfielder’s duty is to play both ends of the field, offense and defense so endurance is key.  Lacrosse can become a very fast-paced game, the ability of the middies to transition the ball can be a huge deciding factor. They cover the most territory so have to be very aware of their surroundings and also the overall flow. In Field Lacrosse you can have offensive middies, defensive middies and long stick middies.  The depth of your middie lines can really become the back bone of your team. Middies can produce offensively but are relied on for their good stick to transition the ball.  Accurate passing for clearing purposes and getting the ball to the attackmen.  Also to stand their ground when playing defense.

A defensemen’s  duty is to stop the opposing team from scoring. There must be at least three defenders on one side of the field at all times, if not it’s an offside penalty.  Generally put on the attackmen to tie them up with a longpole or slow them down. There are times where they can be put onto strong offensive middies. A strong defender will have footwork and passing skills in order to clear the ball up the field.

Pretty obvious, stop the ball from going in the net! Eye coordination and quick reflexes are key for goalies. They face shots from all angles and various speeds. Besides stopping shots goalies have other responsibilities. Communicating with the defense so they know where the ball is at all times.  The goalie has the best view and can call picks or doubles if needed.  Also, after a shot is stopped, pass the ball quick or run up even quicker.  A field goalie out of crease is headhunted by everyone on the field.