The history of lacrosse is traced back to the Haudenosaunee people who called it Baggataway, Tewaarathon (little brother of war) or Deyhontsigwa’ehs (They bump hips).  Lacrosse emerged from a sport known as Stick-Ball (English translation).   Later it was given the name Lacrosse by Catholic Jesuits because they saw similarities between the sticks and a Bishop’s Crosier.

The Haudenosaunee believed the inception of Lacrosse was a gift from their Creator and therefore had spiritual purposes.  Locally the game would toughen up the men for hunting and war. It would also be used to bring glory to themselves, their tribe and also to strengthen alliances. Lacrosse would also sometimes be used to settle disputes between tribes.  On a spiritual level the natives played the game in order to entertain the Creator.

History of Lacrosse – The Equipment

The lacrosse ball was first made from wood but eventually evolved into deerskin balls filled with fur. The first lacrosse sticks were essentially giant wooden spoons with no netting. Later on the stick emerged into a type that had one end bent into a 4 to 5 inch (130 mm) diameter circle which was filled with netting made of deer sinews. 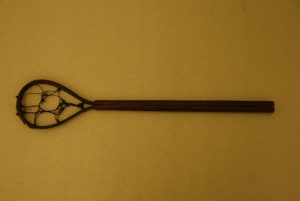 These sticks were bent into shape after being softened through steaming and lengths typically ranged from 2 to 5 feet (1.5m).  Sticks often had elaborate carvings on them for spiritual intentions. A lacrosse stick would be given to each newborn and also buried with an individual so they can play lacrosse with the Creator in the afterlife.

History of Lacrosse – The Game

Games would take place in large areas between villages and last several days. The goals would be trees and were 500 yards to several miles apart. There was never a minimum or maximum number of players on a lacrosse field. Some say that games could have between 100 to 100,000 players (ouch). 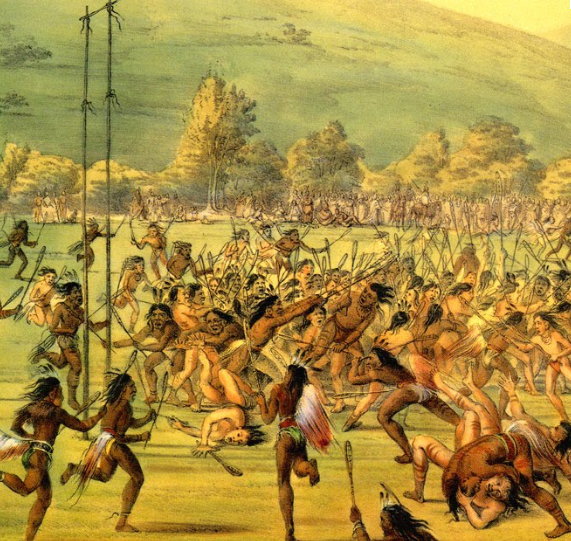 The game would begin with the ball being thrown in the air and the two teams running to gain possession. Because of the large number of players involved, the game would look like a huge mob of people slowly running up and down the field.

History of Lacrosse – The Rules

The original rules of Lacrosse included; don’t touch the ball with your hands, no boundaries and hit the other team’s goal. Large rocks or trees were used as goals but that soon changed into wooded poles. Each wooden pole had a mark at chest level and there were two scoring areas on the wooden post. The top half of the pole was worth two points and the very top of the pole was three points.

Scoring wasn’t kept in recreational games. In games between tribes the scoring typically reached 20.  At times they would play from sun up until sun down.