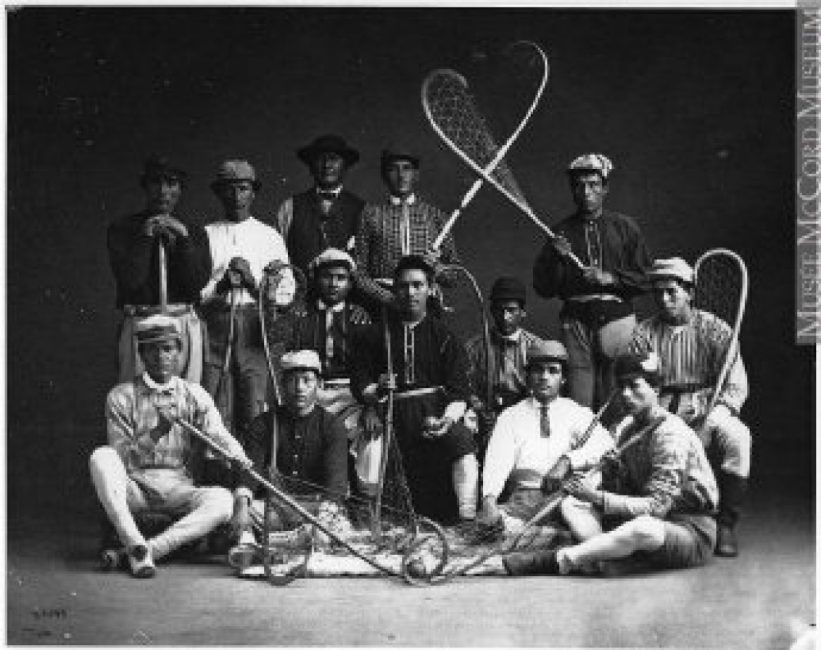 The article was originally written by Mary Ormsby, a featured reporter for the Toronto Star.  I would like to thank Mary and the Toronto Star for giving me permission to share this with the lacrosse world.

As Montreal prepares to re-enact an 1867-style lacrosse game, craftsman Alf Jacques explains what goes into a stick — including the spirit of the tree.

A scripted re-enactment of an 1867-style lacrosse game — using the 19th-century rules of Montreal dentist George Beers — with players (students from Kahnawake) dressed in authentic clothing is an event highlight. The game takes place June 17 on McGill University’s lower field in downtown Montreal. This field was used by the Montreal Lacrosse Club and the Kahnawake Mohawk in the early 1870s.

“Hickory is a sacred tree in our culture,” said Alf Jacques, 68, a stickmaker for 55 years. Before a hickory is cut down, tribute is paid.

Onondaga Nation men are buried with their traditional lacrosse sticks so they can play the Creator’s game in the spirit world with their ancestors, Jacques said of the Onondaga legend.

Jacques chooses a shagbark hickory with a straight trunk. No knots or limbs for the first three metres off the forest floor. Such a tree is at least 100 years old, weighs about 90 kilograms and is carried from the woods by hand. (Jacques carries hickory nuts with him, planting seeds for new trees whenever he’s in the forest.)

In Jacques’ workshop, he splits the tree into eighths — sometimes sixteenths — using a wooden mallet, axes and wooden wedges. The lengths, still bearing bark, are hung for at least one month to dry.

The lengths of wood are then steamed under carpets atop a 1,000-litre drum filled with water for about 45 minutes to an hour. The wood needs to be pliable for Jacques to bend the top almost in the shape of a question mark into the lacrosse head shape. A wire is slid over the shaped head to hold it in place while it’s dried for another six months.

Jacques learned the stickmaking craft from his father, Louis. For decades, Jacques used his dad’s draw knife, made in 1832, to remove bark and to carve the stick to its final form. When the blade became too thin, he bought another antique knife — also stamped as made in 1832.

“It’s a good weight and when you’re using a good knife, you understand they were made with the carver in mind,” Jacques said.

More steaming. The stick is steamed to straighten the handle and balance the piece. Final trims are made. Holes are drilled by hand into the head shape (no measuring needed: “I’ve been doing this a long time; I know where they go,” Jacques said) to later weave in the mesh pocket and rawhide “wall.”

Jacques belt-sands the stick, signs and dates it. He burns in his logo before the entire piece is varnished and ready for the woven pocket.

Jacques buys a large raw salted cow hide that he cleans of tissue and fur then soaks until it’s soft. He has a “secret” process to turn the hide into a skinny, unbroken string that’s nearly 600 metres long. He spins it onto spools and later hangs it, criss-crossing his barn, to stretch and dry.

The hardened rawhide must be moistened before Jacques can weave it into a “wall” that bridges the small opening between the head and the handle of the wooden stick. (Aluminum sticks have self-contained plastic heads.) Once the wall is established (the rawhide will harden again), Jacques threads in mesh — using nylon and leather strands — to give the stick its pocket. The one-of-a-kind sticks sell for upwards of $300.

Correction – March 15, 2017: This article was edited from a previous version that mistakenly said stickmaker Travis Gabriel is from Oka, Quebec. In fact, Gabriel is from the Kanesatake Mohawk Territory, located near Oka. Incorrect information was provided to the Star.