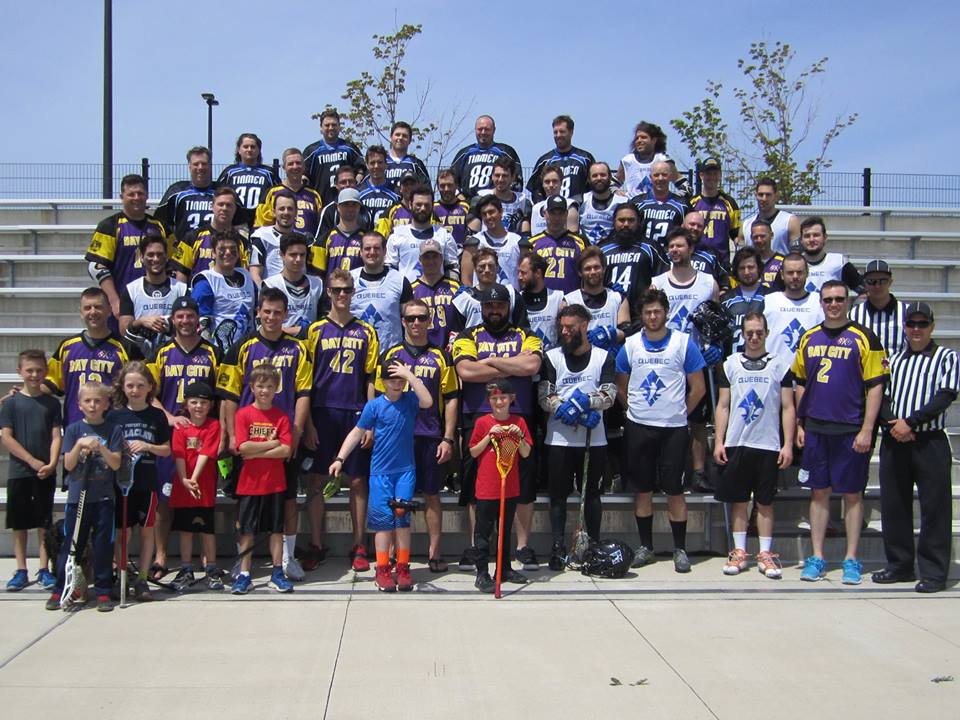 The 150th Lacrosse Celebration will take place June 16th-18th in Montreal. Men’s and women’s games will be happening throughout the festivities. There will be stick-makers from all over North America, the Canadian Lacrosse Hall of Fame and a series of lectures. A re-enactment game will take place on the Saturday to display the sports ancient roots. Next week I will have a more in depth article on these matters. This article is about a team with three identities: Club de Crosse de Montreal (Montreal Lacrosse Club), Fighting Frogs and Team Quebec.

To commemorate the history behind Lacrosse and it’s modern origins, Montreal Lacrosse Club will face Toronto Lacrosse Club. There will be one game on Saturday and one on Sunday. These clubs have over a hundred years of history between them. It will be a friendly game of course but still an honour to be chosen to represent my city at such an event as the 150th.

The name comes from the Laval Fighting Frogs. Laval is a neighbouring city of Montreal who have one of the strongest Field Lacrosse teams in the province. I have been fortunate enough to play with them in the past and have also played against them for many years. All there is to say is they are absolute beauties. Quebecers from all walks of life who have a great sense of humour, the laughs don’t stop. I bring this name up because a majority of this Montreal Lacrosse Club has played for the Laval Fighting Frogs.

Administrators, ambassadors, coaches and players from Quebec saw the 150th Lacrosse Celebration as an opportunity. It has been three decades or more since Quebec had a Senior Men’s Field Team. Even though this is the Montreal Lacrosse Club for the event, it will translate into Team Quebec in the near future I am sure. The goal for this team is to make something finite for generations of lacrosse players to come. Something for the youth to look up to and strive for. Growing the game if you want to keep it simple.

Just this past weekend the team took a road trip to Burlington, Ontario for some exhibition games to prepare for the 150th. About a 5-6 hour drive for most of us but everyone was up for the experience. Most players showed up the Saturday afternoon to get acquainted with the area. It was a crystal clear blue sky so we all spend most of the afternoon throwing the ball on a green space beside the Comfort Inn. In the evening we caught a Halton Hill Jr. B game which was an overtime nail biter. Team dinner after that and disclosed information.

We all dusted ourselves off and ended up getting to the field and ready for game time. The schedule of the day was as follows:

10:00am to 11:30am – The Fighting Frogs from Beautiful Québec vs the Bay City Rollers

Noon to 1:30pm – The Tin Men from Toronto Police Department vs the Fighting Frogs

The event itself was a huge success for all. Both the Bay City Rollers and the Tin Men from Toronto showed nothing but class on and off the field. They took us in with open arms and we all enjoyed the day games and festivities together.

Dan Dawson even made an appearance and played for the Tin Men before and after his clinic. Over 200 people were there between the ages of 4-44 to take in the knowledge from the clinic. Every sentence and action in the clinic showed his passion and knowledge of the game. Everyone who was there took in something and saw why he is such a world class professional. Thank you to everyone who was involved in this event. See you next year no doubt!

The first game between the Montreal Lacrosse Club and the Toronto Lacrosse Club will take place in two and a half weeks. We are all happy to be a part of this event, all from the province and are proud to be on the team. There is a good mix between juniors, post juniors and veterans on the squad. This speaks volumes for the future of the club and province. Montreal Lacrosse Club, Fighting Frogs or Team Quebec, call it what you want. The only thing I want to get across is that Field Lacrosse is back in Quebec and here to stay!